The Senate Wing Flag: Behind the Scenes

In planning Mourning a President, an exhibit about the funeral of John F. Kennedy, it was fitting that an American flag was selected as a key focal point. Prominently displayed is the flag that flew over the U.S. Senate during the period of mourning following the assassination of President Kennedy. This is the first time that this 15- by 10-foot flag, which is part of the Museum’s vast collection, has been on view fully unfurled since 1963. 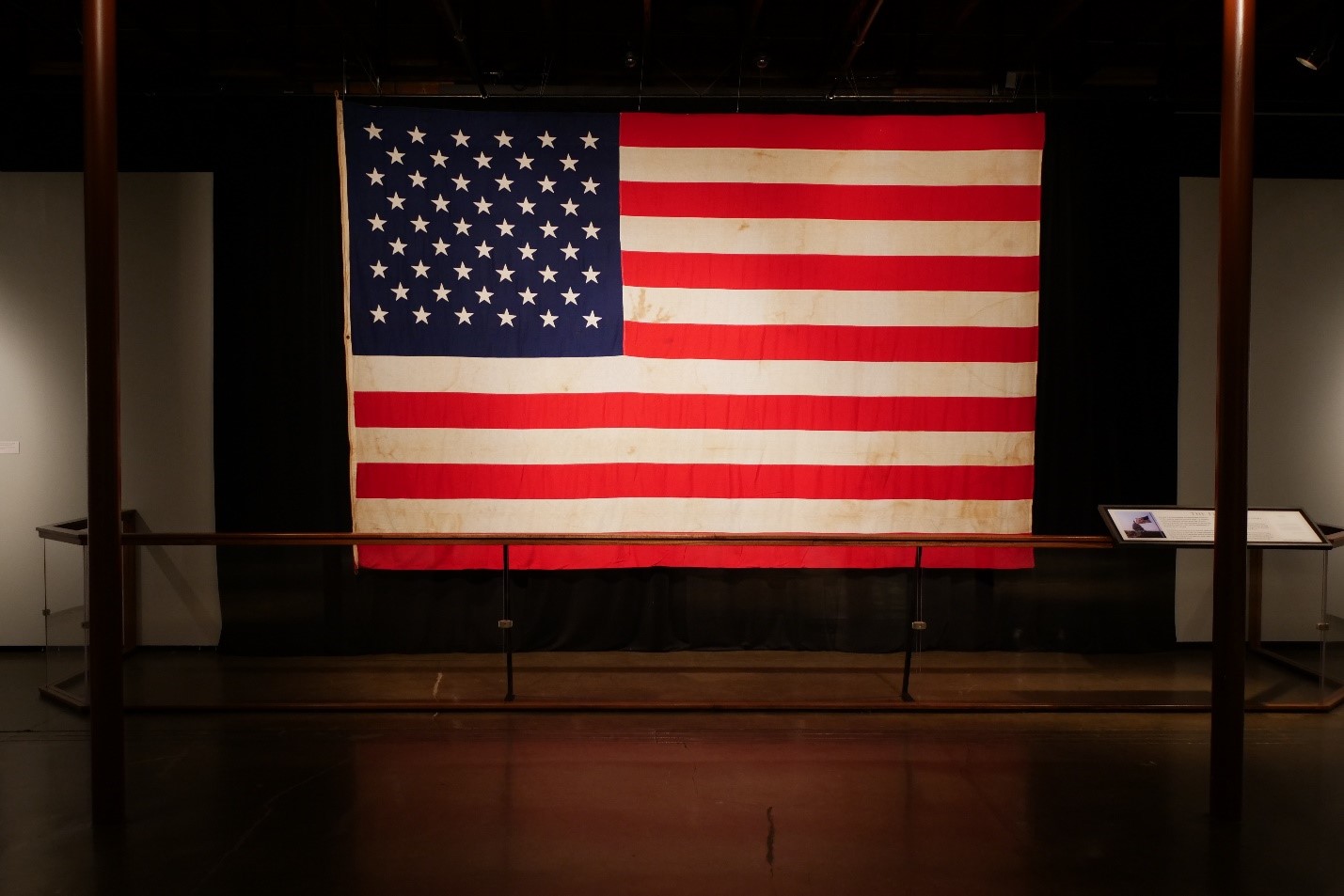 The U.S. Senate wing flag is displayed on the seventh floor of The Sixth Floor Museum at Dealey Plaza.

The largest and most striking object in the temporary exhibit, this flag was hoisted above the Senate wing of the U.S. Capitol building on November 7, 1963 as a matter of routine. When news of the assassination of President John F. Kennedy reached Washington, D.C. on November 22, the flag was lowered to half-staff, and it remained that way until it was lowered on December 22, at the close of the official month of mourning. While this flag did not play a formal role in the funeral, it was a prominent symbol of the nation’s grief on the grounds of the U.S. Capitol.

When installing a historic artifact for public viewing, the desire is to make an object as accessible as possible while protecting it from damage – be it from environmental elements such as light or from risks associated with the display methods. The flag provided a unique challenge, due to both its size and age. 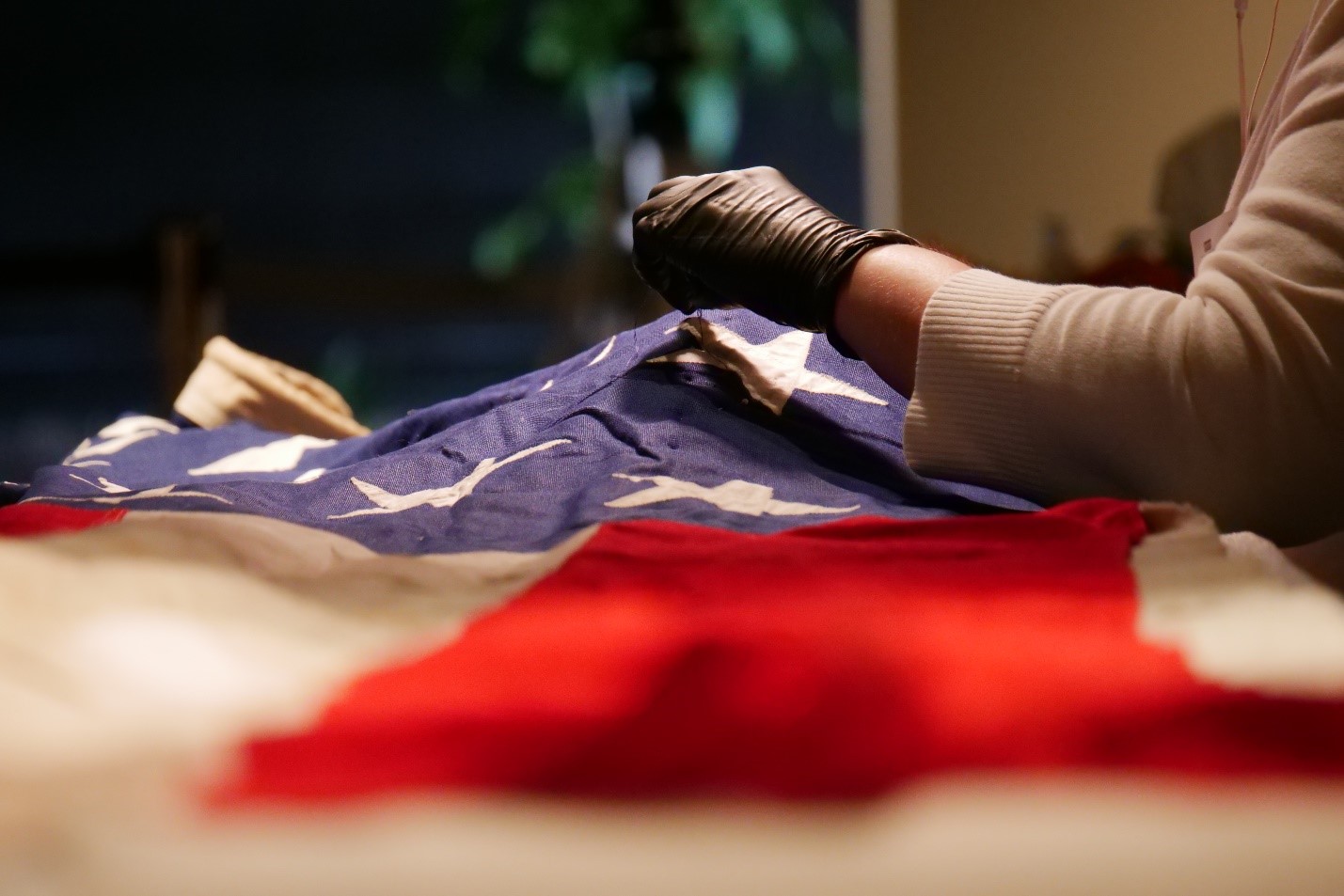 A textiles conservator carefully prepares the U.S. Senate wing flag for installation as part of the Mourning a President exhibit

In the exhibit’s planning phase, the Museum’s Collections staff enlisted a textiles conservator to examine the historic flag to help determine if it could be safely displayed. In February 2017, this critical assessment took place in a public space where Museum visitors were intrigued to witness the process. Assured the flag’s physical integrity was intact, staff proceeded with plans to install the flag in the future exhibition. “It’s in very good shape structurally. There was some discoloration, mainly in the center of the flag, which is common when textiles are in storage,” says Lindsey Richardson, Curator of Collections. “Stains were present on the flag when it was acquired by the Museum, and we can only speculate as to their origins.”

It was important that the manner of hanging the flag in the exhibit comply with advisory rules for display and care of the U.S. flag set out in the United States Flag Code, while at the same time ensuring the safety and long-term preservation of the flag as a museum artifact. Mounted from a custom-made rod and sleeve that both support the flag’s structure and allow it to extend freely from the top, the fully unfurled flag provides a striking centerpiece to the exhibit. Museum visitors are able to view and appreciate the flag in its entirety, while its safety and preservation needs are addressed by controlled lighting and a barrier rail.

When the exhibit closes, the flag will be cleaned and carefully stored using archival-grade materials, preserved for future generations as an important symbol of the death of one of this great nation’s most revered leaders.

The U.S. Senate Wing Flag will be on display as part of the Mourning a President exhibit until February 19, 2018.

Author’s Note: In 1954, President Eisenhower issued Proclamation 3044, which established federal guidelines for the display of flags at half-staff for national leaders and other officials as a mark of respect to their memory. The proclamation specified that upon the death of a president or former president, the flag must remain at half-staff for a thirty-day period. The assassination of President John F. Kennedy was the first presidential death following the proclamation, making Kennedy the first for whom the month of mourning was observed.

Additional information about what the American flag symbolizes can be found here.