By Dr. W. Marvin Dulaney, Associate Professor Emeritus of History at the University of Texas, Arlington

Of course, some historians, as well as others, argue that the civil rights movement ended before Dr. King’s assassination. They cite the backlash that the movement endured after Stokely Carmichael, the chairman of the Student Nonviolent Coordinating Committee (SNCC), made his infamous “Black Power” speech in Greenwood, Mississippi during the “March Against Fear” in 1966. Dr. King was on the stage with Carmichael when he gave the speech and tried to change the shouts by the crowd from “Black Power” to “Freedom Now,” but failed. “Black Power” became the new slogan of the movement and it alienated many whites who supported and participated in the movement as well as many of the foundations and organizations that provided financial support to the movement. Opponents of the “Black Power” slogan equated it with black violence against whites. Given the ongoing use of violence by whites against blacks to maintain white power and white supremacy, it was logical for the opponents of Black Power to conclude that the movement would evolve to their worst fear. But they were wrong.

Several of Dr. King’s biographers also argue that the movement ended in April 1967 when Dr. King gave his famous “Beyond Vietnam: A Time to Break Silence” speech at Riverside Baptist Church in New York opposing the war in Vietnam. In the speech, Dr. King indicted the United States as “the greatest purveyor of violence in the world” and noted that the U.S. government sent young black, brown and poor men to Vietnam to fight in an imperialistic war, but did nothing to improve their lives at home. The Johnson administration, most of the media and even some of Dr. King’s allies in the civil rights movement condemned him as a traitor for speaking out against the war. His critics condemned him and warned him that he should stay away from foreign policy and confine his efforts to fighting only for “civil rights.”

In 1968, despite the continued resistance to civil rights by those who opposed the movement as well as the actions by the federal government to undermine Dr. King and the movement itself, Dr. King had not given up on it. In his last book, Where Do We Go from Here: Chaos or Community? (1967), Dr. King wrote about expanding the movement from civil rights to human rights and addressing the fundamental issue of economic justice. He wrote that the wealthiest country in the world should address poverty by providing every citizen a livable income, affordable housing and a decent standard of living. He expanded his efforts to address the nation’s rampant poverty by supporting the sanitation workers’ strike in Memphis and by planning a Poor People’s March in Washington, D.C. for the spring of 1968. He also believed that a government and society dominated by institutional racism should provide “affirmative action” to provide special support to those whose lives had been historically circumscribed by individual and institutional racism. 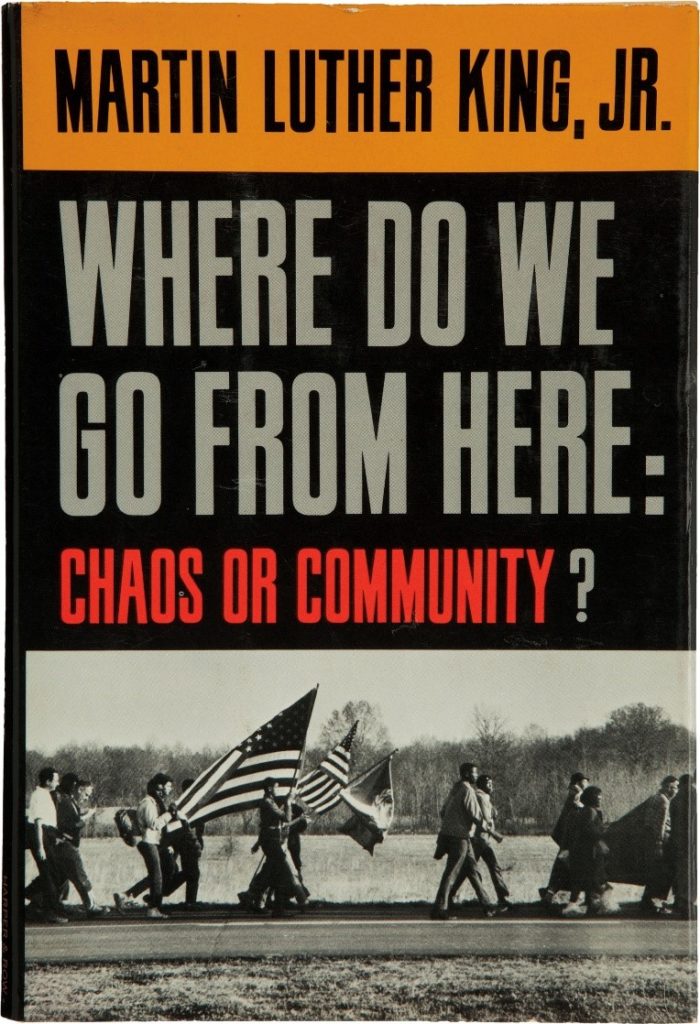 Where Do We Go from Here: Chaos or Community? by Dr. Martin Luther King Jr, 1967

But Dr. King’s assassination ended not only his efforts to expand the movement from civil rights to human rights; it ended the movement itself.

With the assassination of Dr. King, the fissures in the civil rights movement expanded and broke it. White Americans acted on Richard Nixon’s “southern strategy” in 1968 to elect him president. For African Americans, the assassination of Dr. King sent a clear message: his strategy of moral suasion, nonviolent social change and his efforts to form a “beloved community” were pipe dreams. Many young African Americans increasingly supported organizations that advocated “Black Power” and “Black Nationalism.” While the FBI and the media sought to paint organizations and individuals who advocated these two ideas as violent, anti-American revolutionaries, young African Americans like me (I was 18 in 1968) rallied behind these ideas as the natural evolution of the ongoing struggle for black liberation.

Indeed, the assassination of Dr. King made it very clear to my generation that “loving your enemies,” “turning the other cheek” and adopting nonviolence as tactics would get us killed. While we loved and honored Dr. King, we saw that the resistance to his very mild and legitimate demands for the nation to honor its own creed of equality of opportunity, voting rights and basic human rights were demands that the nation could not fulfill. Armed self defense and even urban guerilla warfare seemed more plausible as strategies and tactics to win our freedom and to change the inherent racism in American society than moral suasion.

Based on the “wars of national liberation” that we saw being waged in Vietnam, Angola, Mozambique and in other colonized nations in Africa and Asia, we romanticized that we could do the same thing in the United States. But after COINTELPRO (Counter Intelligence Program) and the bloody war that the FBI and the police carried out against the Black Panther Party for Self Defense and other Black Nationalist organizations after Dr. King’s assassination, we came to our senses. We realized that the civil rights movement was over, but we had to survive in order to take the movement to the next level. In addition, we knew that we had to educate the next generation to continue the struggle beyond civil rights.

We adopted the slogan: “a luta continua” (the struggle continues) from FRELIMO (Frente de Libertação de Moçambique (Mozambique Liberation Front) in honor of Dr. King who gave his life and inspired us to find new ways to fight oppression, racism and white supremacy. Indeed, as we have seen, the civil rights movement is over, but we continue to struggle against some of the same issues (political disfranchisement, police brutality and economic discrimination) that confronted Dr. King.

The views and opinions reflected in the Museum’s Guest Blog are those expressly of the author alone, and not of The Sixth Floor Museum at Dealey Plaza.