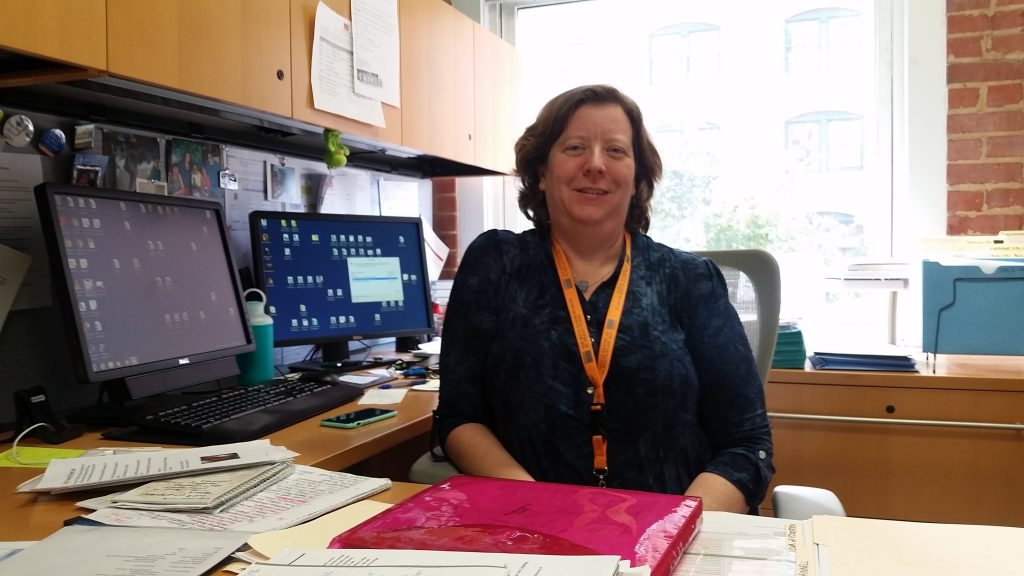 1) Congrats on reaching 20 years at the Museum! Did you think when you started here, that you’d be here that long?

No, not at all. It doesn’t seem possible! I was 26 years old when I started here, or 7 days removed from my 27th birthday, very early in my career, and I thought, five years – tops. I wasn’t from Texas and it was just my second professional museum job after a short-term position in Illinois.  I thought, I’ll be there five years, then I’ll move on. And 20 years later…

2) How did you get your start here?

The Museum had only been open seven years when I started here, so still relatively new. At that time, I’d been working as a temporary project curator at a small museum in Illinois, and I was looking for something more permanent in museum collections. The Sixth Floor Museum at the time was looking for their first museum registrar, and so I applied. As registrar, I oversaw the Museum’s collections management systems and practices and developed policies and procedures for the care and documentation of the collections.  In simple terms, I kept track of the collection—physically, intellectually and legally.

3) What’s the biggest change you’ve seen since you’ve been here?

It’s a completely different place. The Museum has grown and evolved so much since I’ve been here. There were 20 people working here when I started—today, we have more than 50. We didn’t have the offices we’re in now. Most of us were in the basement of the Visitors Center. We had a collection of about 15,000—it’s up to more than 50,000 today, and we’re still growing! The Museum was so young when I started, so of course there’s growth and development, and it’s been pretty cool to witness that.

I remember in 2008, when we developed an exhibit about Bob Jackson called A Photographer’s Story. It was very shortly after I was promoted to Director of Collections, and it was the first exhibit we’d put together with me in that position. We completely developed that exhibit in house, and it was a project I oversaw. When it was finally done, it was a great feeling of accomplishment. I remain very proud of that exhibit and the work our team did to put it together.

Similarly, when we did the updates on the Sixth Floor for the 50th anniversary in 2013. Even though it involved a week of overnight work because the Museum would be open during the day, so we could only work on the updates at night. We had some late nights and even two all-nighters. It was difficult and a challenge, but it was great when it was all done.

5) What’s your favorite object in the collection?

My favorite object in the collection is this little medal commemorative coin from a company called The Southern Rock Island Plow Company. They were the first business that was in the building at 411 Elm Street. The original building was built in 1898 and it was a five-story building, and it was occupied by the Southern Rock Island Plow Company. The building was struck by lightning and burned to the ground in 1901, and the building that came to be known as the Texas School Book Depository was built on its foundation, as a seven-story building. This little medallion has an engraving of the five-story building on it. It’s the oldest item in our collection, and every time I see it, I think about, if that building hadn’t burned down, there only would have been a five-story building here. It’s possible a company called the Texas School Book Depository could have still been there in 1963, but what might have been different, if there were no sixth floor? I love that it’s the oldest item in the collection—it’s even older than the building!

6) If you could say something to your younger self of 20 years ago when you first started here, what would you say?

You have no idea what you’re in for! And who are you kidding that you’re only going to be there for 5 years? Dallas will become your home. You’ll meet some great people. You’re going to be part of the growth of an incredible museum. Brace yourself, it’s going to be an interesting ride. 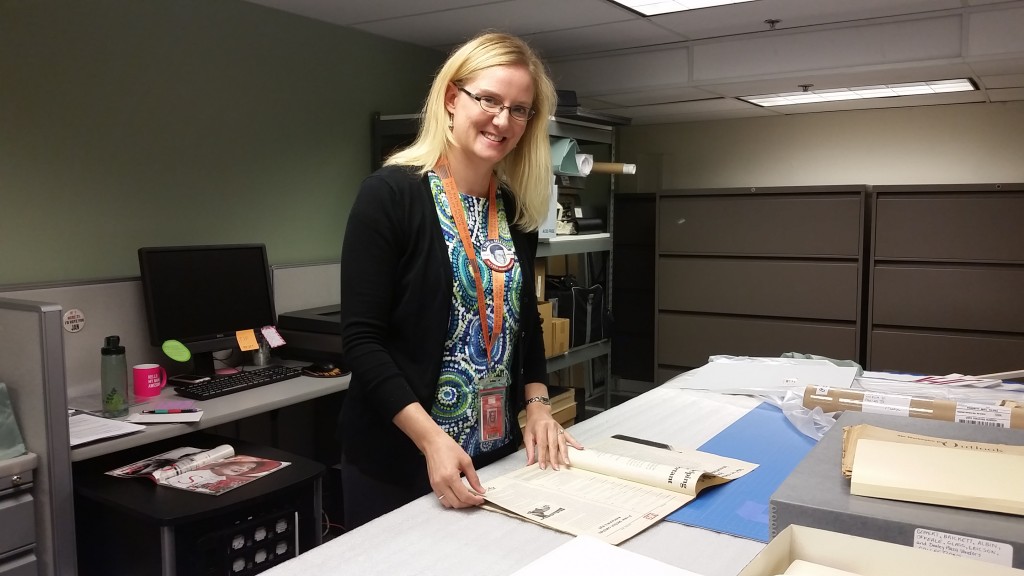 1) You recently changed positions from our Guest Services team to Collections. Tell me a little about how that happened.

My background is actually in Collections. That’s what I worked in in other museums and that’s what I went to grad school for. We moved here for my husband’s job a few years ago and I was actually hired as seasonal staff during the 50th Anniversary, and then I got hired on to the Guest Services team permanently. But when the Collections position came up, it was perfect for me.

2) Tell me about your new position.

I’m working on cataloguing different parts of our collections. For example, I was working on some photographs of President Kennedy a week before the assassination when he was visiting a U.S. Navy ship in Florida. Right now, I’m working on some magazines from the 1960s and even one from 1995 when Rose Kennedy passed away.

3) What is cataloguing all about & why is it important?

Cataloguing is about capturing all the pertinent data about the item. The date, description of the item, donor information and the historical significance of an item. We also either scan & photograph it to have a visual record in the database. We try to get as much information as possible about the item, so that they can be searched for and found by researchers on our website. We have only catalogued about half of the more than 50,000 items in our collections. It takes a lot of time to catalogue, so we just have to slowly work our way through it.

4) What’s your favorite part about your new position and working at the Museum?

I love getting to handle the objects and investigating their significance. For example, yesterday I was working on a copy of a job application turned in by Lee Harvey Oswald from October 1963, and there was this handwritten note on the back from the interviewer about what a former employer told him. Basically, he was not recommended for the job. It’s just cool to see this little insight into what was happening in the past.

My favorite part about working at the Museum is the people I get to work with. It’s not such an enormous staff that you don’t know who people are. I enjoy that this is such a pivotal moment in U.S. history and getting to help tell that story.

5) What’s something cool that’s happened to you since you started working here?

A couple of weeks ago, I was working Admissions and I met this man who was a former Dallas police officer and he told me he was on the force in 1963, although he was not in Dealey Plaza when the assassination happened. But he was close to J.D. Tippit, so I immediately thought it would be great to ask him to participate in our Oral History Project. So I got his information and hopefully we’ll be able to capture his story. It’s pretty cool to get to meet people who have a connection with this place and what happened here. 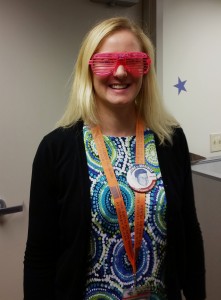 I knit! I keep a project with me everywhere. I keep one in the car in case I get stuck in traffic. I always have one with me and three sitting on my couch in the midst of being completed. I’m working on a skirt for my cousin’s 7 year old daughter and I’m working on two baby hats. And I’m making a turtle!

7) If you were a superhero, what would your superpower be?

To fly. It’d be cool to go wherever you want, whenever you want. Plus, you can skip traffic!

Want to join Jan on our team? Keep an eye on JFK.org/Careers for open positions, or follow us on Twitter @sixthflrmuseum for updates!