Timed tickets must be purchased in advance at jfk.org.

We continue to enforce mask-wearing for staff and visitors. 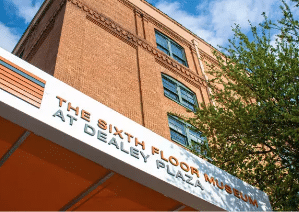 The FBI Model: Behind the Scenes

Many visitors express curiosity about what goes on behind the scenes at The Sixth Floor Museum at Dealey Plaza, and this new series, “The Sixth Floor Museum: Behind the Scenes,” was created to answer those questions. It takes a lot of hard work and daily attention to every detail to protect and preserve the 50,000+ objects in our collection. From a multitude newspaper clippings to the recognizable Hertz sign formerly atop the Texas School Book Depository, there’s a myriad of exciting, interesting and unique items. The care of these objects is varied as well, and our Collections staff is up for the challenge of looking after a large array of objects. A number of items are on loan to the Museum, and the staff cares for these objects just as if they were our own. One such object is the FBI model, on display on the sixth floor.

Owned by the National Archives and Records Administration (NARA), the FBI Model is on long-term loan to The Sixth Floor Museum, where it has been on display since 1995. The model was built by the FBI in 1964 to help investigate the Kennedy assassination and was also later used by the Warren Commission and the House Select Committee on Assassinations when they conducted their investigations. There are very strict conditions, especially regarding lighting, for this special object and the Museum is diligent about ensuring these conditions are met.

Recently, Abigail Aldrich, Exhibits Conservator at NARA, stopped by to assess the condition of the model.  Aldrich says that one of the most interesting things about the FBI Model is that because it was developed specifically to assist with a criminal investigation, it was not built to last forever. For example, the shrubs and trees in the model are made with natural sponge, which is very fragile. Over time, tiny pieces might start to come off. Aldrich says this can’t be totally avoided, but meticulous care can help slow the aging process.

As a part of her assessment, Aldrich performed what is known as a “condition check” on the FBI Model. To do this, she compared the model’s current state to what was previously noted by NARA, checked for areas of concern and ran numerous tests. Light levels, temperature and humidity are monitored to make sure that those levels meet the exacting standards NARA sets in place for all objects on loan. Aldrich says that though she expected there to be significant change since the last time NARA checked the object, she was impressed by its overall condition.

The FBI Model is encased in special UV-filtered glass that keeps as much light as possible out of its case without obstructing one’s view of the model. To help prevent damage from light, the Collections department monitors surrounding light levels with both an environmental monitor and a light reader installed inside the FBI model case. If testing reveals that levels are incorrect, staff adjusts the model’s exposure to light sources. Sometimes, this means removing or rearranging light around the case.

Very little about the model’s condition has changed since the last time it was inspected by NARA. That’s a testament to The Sixth Floor Museum’s commitment to preservation and to the strong working relationship between NARA and our Collections staff.