This transcript is taken from videotape of the live broadcast seen nationwide on ABC on November 22, 1963. The interviewer, seated on the left, is WFAA-TV program director Jay Watson. On the right is Abraham Zapruder. The interview is part of the Museum’s WFAA-TV Collection. 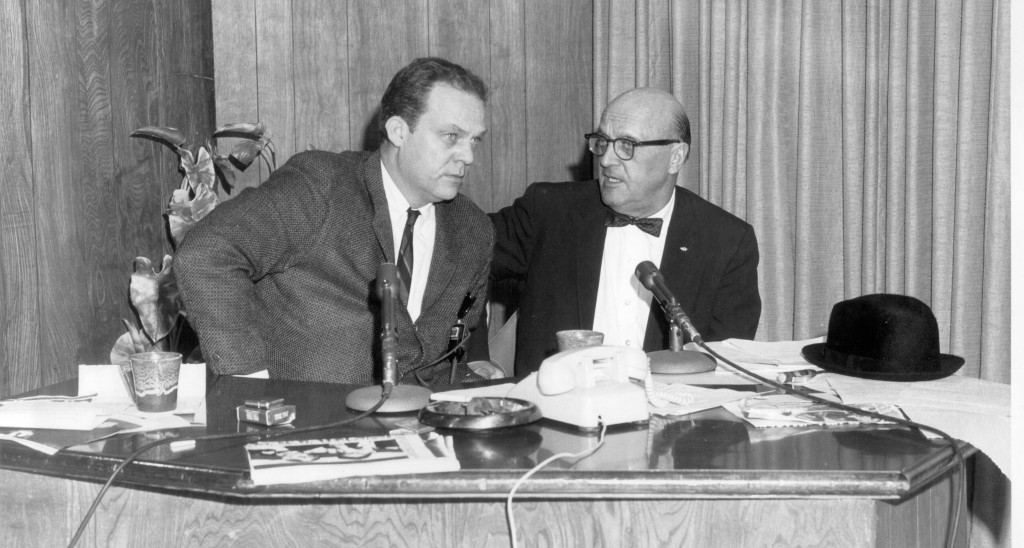 Watson: A gentleman just walked in our studio that I am meeting for the first time as well as you. This is WFAA-TV in Dallas, Texas. May I have your name please, sir?

Zapruder: My name is Abraham Zapruder.

Watson: Zapruda. And would you tell us your story please, sir?

Zapruder: I got out in, uh, about a half-hour earlier to get a good spot to shoot some pictures. And I found a spot, one of these concrete blocks they have down near that park, near the underpass. And I got on top there, there was another girl from my office, she was right behind me. And as I was shooting, as the president was coming down from Houston Street making his turn, it was about a half-way down there, I heard a shot, and he slumped to the side, like this. Then I heard another shot or two, I couldn’t say it was one or two, and I saw his head practically open up, all blood and everything, and I kept on shooting. That’s about all, I’m just sick, I can’t …

Watson: I think that pretty well expresses the entire feelings of the whole world.

Watson: You have the film in your camera; we’ll try to get …

Zapruder: Yes, I brought it on the studio, now.

Watson: … we’ll try to get that processed and have it as soon as possible.
WFAA then shows a videotape of the hearse with Kennedy’s body leaving the Parkland Memorial Hospital driveway. Watson next shows a photograph of the Texas School Book Depository and points to the sixth floor window.

Watson: There is a picture of the window where the gun was allegedly fired from that killed President Kennedy …

Zapruder: I must have been in the line of fire.

Zapruder: I say I must have been in the line of fire where I seen that picture where it was. I was right on that, uh, concrete block, as I said. And as I explained before, is a sickening scene. At first I thought perhaps it’s a, uh, it sounded like, uh, somebody make a joke, you hear a, a shot and somebody grabs their stomach.