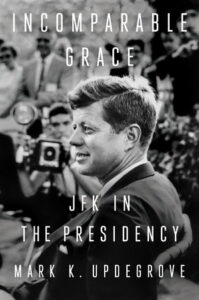 Museum members are invited to join the Museum for an evening with Mark Updegrove to celebrate the publication of his new book, Incomparable Grace: JFK in the Presidency.

Want to attend but aren’t a member yet? Join today!

Nearly sixty years after his death, JFK still holds an outsize place in the American imagination. While Baby Boomers remember his dazzling presence as president, millennials more likely know him from advertisements for Omega watches or Ray Ban sunglasses. Yet his years in office were marked by more than his style and elegance. His presidency is a story of a fledgling leader forced to meet unprecedented challenges, and to rise above missteps to lead his nation into a new and hopeful era.

Kennedy entered office inexperienced but alluring, his reputation more given by an enamored public than earned through achievement. In this gripping new assessment of his time in the Oval Office, Updegrove reveals how JFK’s first months were marred by setbacks: the botched Bay of Pigs invasions, a disastrous summit with the Soviet premier and a mismanaged approach to the Civil Rights movement. But the young president soon proved that behind the glamour was a leader of uncommon fortitude and vision.

A humbled Kennedy conceded his mistakes, and, importantly for our times, drew important lessons from his failures that he used to right wrongs and move forward undaunted. Indeed, Kennedy grew as president, radiating greater possibility as he coolly faced a steady stream of crises before his tragic end.

Incomparable Grace compellingly reexamines the dramatic, consequential White House years of a flawed but gifted leader too often defined by the Camelot myth that came after his untimely death.